After reconstructing these physical spaces, I’ve found it useful to plot them graphically. Here’s how I’ve done it.

First of all, I needed to find a map of London from roughly the same period. The dispute I’m studying took place in 1641. Through the British Museum’s “flat art” database, I found a 1658 map by Wencelaus Hollar which was near enough the period.

© The Trustees of the British Museum

The British Museum only provides low-resolution files for immediate public use. However, you can request higher-resolution files for free for non-commercial use. You order via a web-based form and files are returned by e-mail. I was impressed by how speedily it was returned – within 12 hours over a bank holiday weekend.

Having got my image file, I converted it to black and white so that it was easier to view. This is easily done in any paint programme. I then used Google Earth to overlay it on a modern map. This is easily done using Google Earth’s tools – it’s simple to squash, rotate and stretch the map to make it fit. You can also alter the opacity of the overlay while you’re fitting it.

An exact fit is always difficult due to the fact that modern maps have different projections to those from earlier periods and are not necessarily exactly to scale. However, I was able to get a reasonable match by fitting the north bank of the Thames together in the two pictures, then trying to align other key landmarks like St Paul’s and the Tower of London. At most, some of the roads misalign by about 100-200 yards. 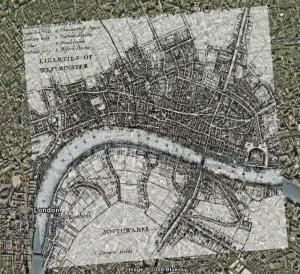 You can then add in place-markers fairly easily, using the Roads overlay in Google Earth to find your way around the city and pinpoint the location. Google Earth makes it easy to change colours and labels of these as you wish.

Because of the slight misalignment, it’s not exact, but it does provide a good way of easily plotting points on a map and seeing whether clusters or patterns emerge. If I’d done it in Paintshop Pro or similar, I’d have had to mess about with layers myself, whereas Google Earth does it all for you. You can then keep it saved as a KMZ or KML file, and add further layers as and when you want – for instance if you were investigating other pamphlet disputes and trying to plot their centres of gravity all on one map.

(NB – the second and third pictures are done with the low-res image rather than the high-res one provided by the British Museum, to avoid any possible breach of terms of use).