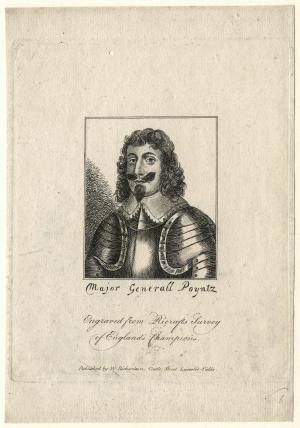 Most people have heard of Parliamentarian generals like Cromwell or Fairfax, and figures like Ireton and Lambert are also relatively well-known. Sydenham is fairly obscure, though, which is a shame as his life is an interesting one. He is unfortunately not the most sympathetic of figures. Much of what is known about his early life comes from an autobiography in which I suspect, at points, he is lying through his teeth. His conduct during the failed Presbyterian coup of 1647 also leaves a lot to be desired. Still, every family has to have a black sheep somewhere in it.

Sydenham was born in 1607 in Reigate in Surrey. The Poyntz family’s fortunes had declined since their highpoint a hundred years earlier, and weren’t helped by Sydenham’s father, John, who had to sell property three times in the late 1610s. As a fourth son, Sydenham ended up being apprenticed to a master called William Golder. He didn’t enjoy it very much:

To bee bound an Apprentice that life I deemed little better then a dogs life and base.

A dispute that was subsequently settled between William’s widow, Katherine, and Sydenham’s brother, William, sheds a bit more light on his experience:

The said Sidenham Poyntz in or about the twelueth yeare of his age and duringe his service aforesaid was all most sterved for wante of victualls and necessarie foode, and for pvencon thereof and to releive himself from famyn and stervinge hee the said Sydenham did in or about the tyme aforesaid receave and take vpon the score and creditt of the said William Golder of and from a Chandler then and there neare inhabitinge to the said Golder onely one halfpenny loofe of brede and one halfpenny Cheese. For the doeinge whereof hee the said Golder and his eldest Apprentice or Jurneman, and one mayde servante by the commaundem of the said Golder did soe hould and detayne the sd Sidenham soe that hee the sd Golder whipped him the sd Sydenham with cruill roddes and whippes all his bodie
over from his heade to his heles in such sorte as that hee the said Sydenham was like to die thereof, and did hardly recover the same.

At the age of sixteen Sydenham ran away:

At last I resolved with myself thus : to live and dy a souldier would bee as noble in death as Life, which resolution tooke such strong root in mee, that not long after I took my way to Dover.

Arriving in Termonde in Belgium, he linked up with English forces and joined Lord Vaux’s regiment before then fighting for the Earl of Essex. After seeing lots of fighting with them and with Count Mansfeld, he was then captured by the Turks:

They brought us backe to Belgrade, where they stripped us of all wee had, Cloathes and all, and shaved our heads and put us into a slavish habit… Beeing thus a Captive and Slave, the first thing I was put to, was to fetch and carry wood, then to keep the Kine, after that to manure the Vineyards : in processe of tyme having got a smacke of language I was put to sell Water up and downe the Towne every day and night bringing in the money to my maister which Water I carryed upon a horse in leather bags on ether side the horse one.

The next bit sounds like something out of The Great Escape:

Earely one morning I let my self downe by a hay-rope, which I carried hay withall from above tyed fast, and tooke my way to old Buda, a League distant from Budin where my maister lived, and swimmed over Danubius the River on that side Pesta lyeth, and so I tooke my next way towards Hongary.

He was then recaptured and sold to a pasha, which despite the lack of freedom seems to have suited him better:

I was made groome of my new maisters stable of horses and after employed a Caterer to provide all manner of Victualls for hym and
his Concubines. Not long after one of his Concubines seemed to affect mee and would have mee to wayte on her, and among other things to hold a Bason and Ewer with Water when shee went to ease nature, and came from the hot Bathes, and so our familiarity came to bee the greater : but our familiarity was not so secretly carryed but my maisters sonne got notice of it.

After a total of six years’ imprisonment, Sydenham manage to escape and started fighting for John George of Saxony. However, after his escape he had converted to Catholicism and then switched sides to fight for von Wallenstein. In 1636 he returned to England and wrote his autobiography, while staying at the house of Sir Lewis Tresham (brother of Francis Tresham, who had been involved in the Gunpowder Plot). He didn’t stay long:

Seeing my expectation had failed mee here and no employment in England in that faculty of souldiery, which I have followed from my youth, I doe give a Longum Vale to my Country, and a Longum Vive to my Soveraigne Lord & King, King Charles and will try my fortune againe where I first raised it.

With this background it is perhaps surprising that Sydenham didn’t become a royalist. One of his brothers, Newdigate, did and was killed at Gainsborough in 1643. Meanwhile another brother, John, was serving Parliament in the navy. It’s not clear where Sydenham spent the early 1640s, but by 1644 he seems to have been back in England and fighting for Parliament. By 1645 he had been appointed commander of the Northern Association, and had been made governor of York. In the same year he was victorious at the battle of Rowton Heath, squaring off against forces personally commanded by Charles I.

In 1646, his years in Europe came back to bite him as he was accused of being a papist. He defended himself in a pamphlet titled The vindication of Colonel-General Poyntz. At around the same time, Sydenham became involved with the Presbyterian faction within Parliament: but militants and agitators amongst his troops thought otherwise. In July 1647 he was seized while in York and ‘carried away in his slippers’, according to his wife. He resigned his commission and John Lambert was appointed commander of the northern forces in his place.

Poyntz then had a walk-on part in the failed Presbyterian coup of the summer of 1647, attacking a crowd of Independents outside the Guildhall. His victims were apparently:

in a cruel manner with their Swords hacked and hewed

He then fled to Amsterdam before ending up in the West Indies as governor of the Leeward Islands in 1650. Once these were recaptured for Parliament a year later, Sydenham is supposed to have escaped to Virginia. His father John had moved there late in his life and had died in Jamestown in 1617, so he may have had friends or family there. However, Sydenham’s fate after that is unknown.

(With thanks to Sir James Pennyman (@HistoryNeeds You) who suggested on Twitter that I do a post about Sydenham).