How much can you tell about a person from their signature? One legitimate answer to that question is nothing. That’s probably the right answer if you interpret the question in terms of whether the idiosyncrasies of someone’s handwriting reveal anything about their personality.

In other respects, though, a signature can be incredibly revealing. This is particularly the case for the early modern period, where a person’s signature – on a title deed, on a will, on a book – may be the only surviving material trace of their existence. From a humanist perspective, seeking to recover what we can of the past, finding someone’s signature is exciting.  It is a way of connecting with someone long gone, across a void of hundreds of years. And while trying to discern actual personality traits from signatures may be a dead end, the material aspects of a signatures can still tell us things.

Signatures are a means of expressing one’s identity in textual form. The fact that they became, and remain, the primary legal means of asserting one’s identity means that there are all sorts of culturally-specific assumptions bound up with them. To know how to write, you had to know how to read: the latter was taught before the former. The fact that a person in the sixteenth or seventeenth century could write their name instantly tells you something about them. It also tells you something about how their contemporaries might have perceived them.  The ability to sign one’s name demonstrated to others that you had at least some degree of education, and that you had a certain amount of agency with which to engage in the worlds of commerce, politics or law.

Nor were signatures simply a passive means of asserting a pre-set identity to others. They also provided a means for early modern men and women to fashion and refashion their own identity. Commonplace books, for example, often contain the owner’s signature, in many cases written out over and over again, or in different styles of handwriting. In some cases these signatures show an identity which was already worked out; in others, one which was still being tried on for size.

I recently managed to find the signature of a civil war pamphleteer from a very early stage in his life. This is the signature of Henry Walker, in the book of oaths sworn and signed by apprentices of the Worshipful Company of Ironmongers:

Walker made and signed this oath at Ironmongers’ Hall in Fenchurch Street, near Aldgate, on 20 January 1629. He was sixteen years old, and had probably only recently arrived in London after a comfortable childhood spent in Derby, a member of one of the town’s governing class.  His father had died in October 1627 and it seems likely that Walker was forced to seek his living rather earlier than he might otherwise have done. Later in his life he complained he had been ‘taken from the school to the shop’.

The Ironmongers’ Hall that Walker knew does not exist any more. Its current version sits hidden behind the concrete barrier of the Barbican on Aldersgate Street. The building Holland and Walker were familiar with dated from 1587, when a new building had replaced the ramshackle collection of houses that were there beforehand. We can only imagine what it looked like inside when Walker took his oath: wood-panelled or maybe plaster, perhaps hung with tapestries. But Walker’s signature does give us a means of connecting with the sixteen-year old who stood in that building: newly arrived in London, having left his brothers and sister behind to start a new life with a strange master.

By signing his name, Walker was stepping from one world into another. He was leaving behind Derby, a town of about 3,000 people in which he would have known most people by sight, if not by name. And he was entering London, a city with a rapidly shifting population  nearly one hundred times bigger than that of Derby, in which he knew nobody. London was a terrifying city for those who were not born there. One apprentice called Thomas Raymond, sent to the capital to live with his uncle William Boswell, found the violence which ‘young lads do undergo’ upon arriving in London ‘a very dreadful sight to a young country boy’. Another, Edward Barlow, from Prestwich in Lancashire, was greatly confused by the sight that met him at London Bridge:

‘seeing so many things in the water with long poles standing up in them and a great deal of ropes about them, it made me wonder what they should be’.

He did not realise that they were ships, ‘for I had never seen any before that time’.

Of course, Walker’s signature does not tell us anything about his reactions on moving from Derby to London. As he signed his name in the Ironmongers’ records, he may have felt confident or he may have been nervous. We have no way of knowing. But his signature in itself reveals an aspect of his life that has not been known about before: his years as an apprentice in trade, before a belated period of study at Cambridge and entry into bookselling and pamphleteering. It is a snapshot of a time when he had little power or agency, separated from his family and bound by strict codes of behaviour to a master for seven years.

By contrast, another record of Walker writing his name survives from the end of his life. This is from a book he donated to the Ironmongers’ Company in 1681: 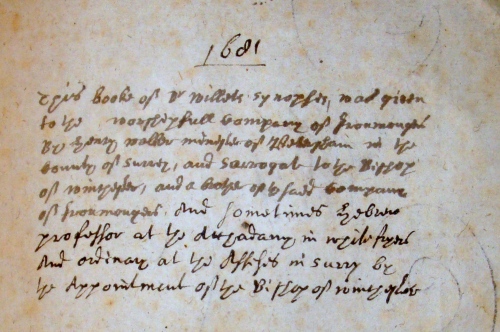 Walker made his gift shortly before the end of his life: he died in February 1687. We can see a very different identity being asserted here. Walker was by now one of the eldest yeomen in the company, and while he had given up participation in the trade by 1642, he continued to be an active member of his Company. He continued paying quarterage until the end of his life, and served as warden of the yeomanry during the 1670s. The way Walker seeks to fashion his identity in this inscription is very different to what he had written 52 years earlier:

This book of Dr Willets Synopsis was given to the Worshipfull Company of Ironmongers by Henry Walker minister of Petersham in the county of Surry, and surrogat to the bishop of Winchester, and a [..] of the said Company of Ironmongers and sometimes Hebrew professor at the ahcadamy in Whitefryers and ordinary at the assizes in Surry by the appointment of the bishop of Winchester.

Here again, Walker’s signature and inscription cannot tell us much about his feelings when he donated the book: whether he was proud, regretful or bitter about the progress of his life. But they do show a man who placed some kind of value on membership of the Ironmongers’ Company, and who wanted to make clear his achievements outside the Company’s trade. The book he donated may also have been significant: it was a 1634 edition of Andrew Willet’s Synopsis Papismi, printed in the same year that Walker was made free from his apprenticeship. I cannot prove that Walker obtained this book in that year, but it is just possible that it was a gift to himself or from others to mark his emergence into the adult world.

Walker’s signatures hint at all sorts of lines of inquiry that have been helpful in uncovering other areas of his life. Just as importantly, though, they have enabled me to feel a connection, of sorts, across hundreds of years to someone whose humanity might otherwise have been lost on me.