The Hampton Court Letter, being a reply to The Epsom Ladys Answer

I came across this fun early eighteenth-century rebus earlier on this evening while searching the British Museum database for something else:

Here is a translation from the BM catalogue. If you have any ideas what the sentence starting with two maids means then you are clearly much cleverer than me:

Glorious lady, Your rebus deciphered does inform that benign stars ordain happiness, to recompense noble flames. Your heart shall be mine I understand you well. Those eyes assure what your tongue should utter, belie not your sole, or I undermine your heart: maids madden[?] refuse but take it. Madam believe your fortune made; my income can bear a coach and six, which all the world knows. When wedlock joins hands then O! for your beauty. Your loving obedient meanest servant, signed, sealed, delivered before Henry Smith.

This seems to have been part of a series of prints: the first from the “Tunbridge Beau”, the second a response from the “Epsom Lady”, the third this one, and the fourth the answer of the “Country Assembly”. Unfortunately the only other image I have tracked down is the fourth and final part of the series:

Translation (again, would welcome any thoughts on the uncertain sections):

Vain pragmaticall man, The style and assurance of your epistle shows you a daring bogtrotter, what earnest of ye lady’s heart could induce you to fancy your famous party and as you believe handsome overtures would be cordially received. You are a great bear for your pains, too [knave paired?] and lunatic, [straw bed, owl] pottage, Bedlam, and iron bars is what you want; [urinal/flask?] clothes her hatred, esteemed nor regarded of a [?]. The Tonbridge rake that begun this folly is a danmed liar and prevaricator, two nonesuch violents not to be uttered on a spinster, a welshman but she made address to defend herself and waived entering fool’s paradise so ridiculously. On that he charitably belies Mr J-n nobody knows wherefor, but ye scandal would not stick. Ye post stays so I can only beg you repent be content confess your treacheries and we shall become your admirers. To show [basket?], Abel Burnet, Martin Palfrey, Millicent Fane, Rose Cage, Bridget Cooper.

All four in the series were published by Andrew Johnston, a printmaker based at the Golden Eagle in Old Round Court off the Strand. He seems to have mostly sold engraved and etched portraits, but clearly fads like these rebuses could also prove a useful money-spinner.

With the 360th anniversary of the execution of Charles I coming up on Friday, I thought I would have a look at what the internet has to offer on images of the regicide.

While Charles’s reputation has been the subject of immense debate, pictures of his execution have tended to be remarkably consistent over the years. Immediate reactions to the regicide – mostly printed abroad, for obvious reasons – tended (like the frontispiece of the Eikon Basilike) to emphasise Charles as martyr. Here, for instance, is an etching from a Dutch broadside of 1649, Historiaels verhael… Carolvs Stvarts, Coningh van Engelandt, Schotlandt, en Yerlandt.

It’s fairly gruesome: you can see Charles’s body spurting blood from its severed neck. From left to right you can see Thomas Juxon, Colonel Francis Hacker, Colonel Matthew Tomlinson and the executioner. But in the apotheosis scene above, you can also see Charles’s spirit ascending to heaven.

Very similar, but without the apotheosis, is this German engraving from 1649, Endhauptung der Konigs in Engelandt.

This kind of image persisted and was reinforced after the Restoration. Below is A lively Representation of the manner how his late Majesty was beheaded uppon the Scaffold, which probably dates from around the execution of various regicides in the early 1660s. At the top of the etching, Charles waits in dignity for his fate, while below one of the regicides is hanged, drawn and quartered. 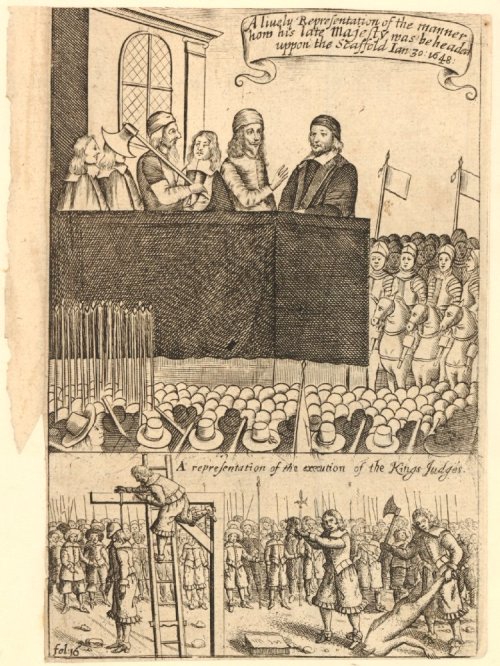 For much of the eighteenth century this kind of representation of Charles’s execution persisted. While Whigs and Tories battled over the history of the civil wars and rewrote and redeployed the key events and figures of the period to suit their ideologies, for the most part Jacobites seem to have resurrected the martyr cult while most orthodox Whigs remained horrified by the actual execution. But the more radical were still happy to celebrate the anniversary of the regicide: The True Effigies of the Members of the Calves Head Club from 1735 shows a mob gathering around a bonfire outside the Golden Eagle tavern in Suffolk Street, near Charing Cross, to celebrate.

By the end of the eighteenth century, though – fuelled in part by events in France – depictions of the regicide were becoming more unstable. Here is a print by James Gillray from 1790, Smelling out a rat; or the atheistical-revolutionist disturbed in his midnight “calculations”.

The figure at the desk is Richard Price, a radical dissenter. He sits below a portrait of the execution of Charles, writing an essay called “On the Benefits of Anarchy Regicide Atheism”.  Smelling him out is a caricature of Edmund Burke carrying a crown in one hand and a cross in the other. On one level the meaning is straightforward: the painting of Charles is labelled “Death of Charles I, or the Glory of Great Britain”. But Burke doesn’t exactly come out of the print wonderfully, either.

Still, even in the Victorian era Charles’s execution was often seen even by those who sympathised with Cromwell as an understandable but regrettable step. Great efforts were made to explain the actions of Cromwell and other regicides as a temporary blip in constitional propriety, prompted more by the evil of royalist enemies than by a failure of character by Cromwell. Radical and nonconformist images of the civil wars seem to have focused on more positive rehabilitations of Cromwell than on debunking the idea of Charles as a martyr king. I haven’t seen any images from the nineteenth century that go down this route. What I have found is some wonderful images of martyrdom: 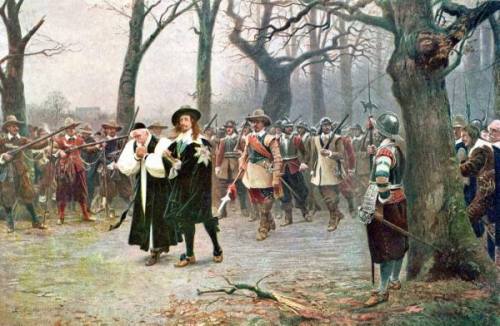 Painting by Ernest Crofts of Charles being led to his execution.

Closer to the present, no account of images of the regicide would be complete without the moving – pun intended – images of the execution in Ken Hughes’s 1970 film Cromwell. If you studied this period at school in England during the 1980s, then probably the mere mention of the phrase “a ciiii-vil war?” will be enough to transport you back to Proustian memories of the film, but if you haven’t seen it here is a clip I found on Youtube of the climactic scene. Alec Guinness as Charles goes resignedly to his fate, while Richard Harris as Cromwell looks moody. But if nothing else it shows the persistence of images of Charles as martyr.

Recently I was given a copy of a book written by a distant ancestor. I’ve blogged about one such book before – a travel guide to Tobago that inspired Defoe to write Robinson Crusoe. This one didn’t have quite such an impact, but I hope it will still be of interest.

The Barrier-Treaty Vindicated was written in 1712 by Stephen Poyntz. In later life, Poyntz would go on to be a diplomat and courtier, but in 1712 he was twenty-seven years old and serving as private secretary to Lord Townshend.

The Barrier-Treaty was published anonymously and is a meditation inspired by the 1709 treaty between Great Britain and the United Provinces. It quickly becomes clear where Poyntz’s sympathies lie. The United Province’s help is vital to secure a Protestant succession from the House of Hanover. Alliances with the French must be avoided at all costs, to mitigate the risk of a Catholic succession. Poyntz gives historical examples ranging from Elizabeth I to Oliver Cromwell to illustrate the benefits of siding with the Dutch, and the drawbacks of siding with France. A full copy of the text can be found on Google Books here.

The book itself is octavo,  200 pages long on cheap paper, and seems to have been designed for a fairly large print-run. It stretched to at least three editions. My copy is in fairly good condition. The paper is slightly mottled, and a few pages are creased, but other than that the book doesn’t appear to have been heavily read. The binding is new, though.

Poyntz went on to be an ambassador in Sweden, then courtier to the duke of Cumberland. He married Anna Maria Mordaunt, reputed to be a great beauty. He died in 1750.

After Poyntz’s death, his friend Walpole described him thus:

Ruined in his circumstances by a devout brother, whom he trusted, and by a simple wife, who had a devotion of marrying dozens of her poor cousins at his expense … Mr. Poyntz was called a very great man, but few knew anything of his talents, for he was timorous to childishness. The duke has done greatly for his family and secured his places for his children, and sends his two sons abroad, allowing them £800 a year.

Rather more acid was Carlyle’s later description of him:

A once bright gentleman, now dim and obsolete.

Today Poyntz is probably best known for being the grandfather of Georgiana, Duchess of Devonshire. His daughter Margaret Georgiana married into the Spencer family and was Georgiana’s mother.

There was a devastating review by Peter Conrad of Lisa Jardine’s new book on the influence of Holland on early modern English culture in the Observer this weekend . Noel Malcolm in the Telegraph had a slightly softer critique.

However, others seem to have liked Going Dutch better. Peter Ackroyd in the Times and Keith Thomas in the Guardian are both worth a read.

Update – John Adamson has also given Jardine a glowing review in the Literary Review .

I’ve spent the past few weeks immersed in seventeenth-century pamphlets and as a result, have been reading a lot of background literature on printing, print culture, bibliography and the history of the book. Below are some scattered thoughts, based on what I’ve read, about different ways of approaching an early modern pamphlet. They will probably be old hat to most of you, but some of them have been new discoveries to me and hopefully some visitors to this blog might also find them useful.

I’ve based this post around a borrowed version of the diagram of the “communications circuit” of the book in Robert Darnton’s classic article, What is the History of Books? – but adding in the crucial extra of the physical book itself. (You might need to click on the image to actually read the text!)