Three years ago I wondered about the possibilities that could be opened up if scholars were able to annotate texts in Early English Books Online. Now you can: EEBO have just launched EEBO Interactions, a social networking site that is linked to EEBO and allows registered users to comment on and discuss the texts.

Having had a quick play about with it, there seem to be three key respects in which EEBO Interactions will be a big step forward. The first is the breadth and accuracy of EEBO’s metadata. In particular, Interactions allows updates to and discussion about the bibliographic provenance of EEBO’s texts. A lot of the authorial attributions for anonymous pamphlets on EEBO are drawn from the short-title catalogues produced by Pollard & Redgrave and by Wing. While the revised editions of both catalogues corrected some dubious or mistaken attributions, if you have spent any time browsing EEBO you will probably have discovered examples where you disagree with the attribution.

One of the great features of Interactions is that it provides fields to add your own information. If you get to a text and someone has added a gloss you think is wrong, you can discuss it on the page itself, or send the other user a message to have a one-to-one discussion with them.

That brings me to the second benefit, which is one of sociability. EEBO have structured Interactions along the lines of Facebook, Twitter and other social networking sites. Users have a user-page where they can put information about their background and interests. Users can send each other messages and bookmark sites of interest, which allows you to see whether other people are working on texts you are studying. I think this will have real benefits for students and scholars across the world, as they start to discover they have colleagues with shared interests whom they never previously knew existed.

The third benefit is one I find hard to express concisely, but which can I suppose be summed up by the phrase “better scholarship”. If that seems a bit intangible, hopefully the context in which it struck me will make it clearer. One of the guidelines for Interactions suggests that users:

Provid[e] concise and informative commentaries on some of the less frequently discussed texts, as are currently available via the EEBO Introductions Series.

EEBO Introductions is a series of short essays on some of the more obscure texts included in EEBO’s corpus of books and pamphlets. It’s intended as a gateway into early modern texts that might otherwise seldom or never be read. At the moment there are nineteen Introductions, which perhaps reflects the fact that they have been centrally managed up to now.

In the future, if you are a student working on a particular text, or an established academic with material on a particular source, you can leave it in your files or you can post it to Interactions. I think this has all sorts of possibilities. It could be a way for undergraduates and postgraduates to get involved in a wider scholarly community, by posting essays on a particular text or snippets from their research that would otherwise never find an audience. It could function – as seminars do now – as something like an intermediate step between undergraduate/postgraduate study and publishing your work in peer-reviewed journals. In ten years time, posting an essay on Interactions or similar sites could be as normal a part of scholarly practice and career structures as submitting a proposal for a conference paper or sending an article for consideration by a journal.

Exposing your ideas or research to a wider audience in electronic form has benefits for students, whether they are pursuing a career in history or simply interested in the period. But it would also have benefits for scholars – if you have devoted your BA dissertation, say, to a particular text, you will probably be far more of an expert on it than the most experienced academic. Interactions will hopefully provide a platform for one group to speak to the other, and vice versa – with the ultimate benefit that knowledge and interpretations of texts can be shared rather than remaining with their originator.

Not many people have signed up as users yet. Given that (at the moment) all contributions have to be approved by an editor, that is probably not a bad thing from EEBO’s perspective, but hopefully the userbase will grow with time, and hopefully the editorial control will be loosened once the site grows. Otherwise, without a large userbase the risk is that the site will never take off. It will need lots of people making lots of comments and notes to really get the most out of it.

So in the spirit of encouraging others to sign up and use the site, here is a link to my own first contribution, on Canterburies dreame: in which the apparition of Cardinall Wolsey did present himselfe unto him on the fourtenth of May last past: it being the third night after my Lord of Strafford had taken his fare-well to the world (London, 1641). Have a look and see what you think. As ever, there is also a good discussion going on at Early Modern Online Bibliography. 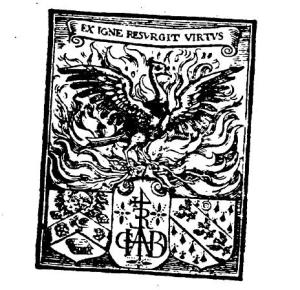 I’ve finally got round to catching up with the June edition of the Historical Journal and I’ve been particularly intrigued by an article by Peter McCullough on the printer Richard Badger [link to article – subscription or Athens access required].

Badger (1585-1641) was a printer who was entrusted with publishing an edition of Lancelot Andrewes’s XCVI sermons (1629) whilst still a journeyman. In the 1630s he was made a master printer and went on to produce a wide range of Laudian publications.

McCullough uses a close study of Badger’s professional and kinship connections with Laud and his supporters to study the extent to which his political and religious ideologies were consistent or sincere. He makes a crucial distinction between books published by printers – in other words, where the capital was put up but the printing often passed on to others, where the publisher’s name would generally be given on the imprint – and those merely printed by them – where they were doing work for other stationers.

This sensitivity to form yields a fascinating analysis of Badger’s career. McCullough argues that to use printed output as an index of religious allegiance is not on its own sufficient – this distinction between published and printed works needs to be borne in mind. An analysis of published works shows that Badger showed remarkable consistency in his Laudianism.

McCullough complements this analysis by looking at an untapped source for stationers’ allegiances – the exchequer’s composition books from the Office of First Fruits and Tenths, which show stationers standing surety for over 300 clerical appointments. He weaves this together with bibliographical analysis, looking at the printer’s imprint Badger adopted, shown above – with its grandeur and heraldic crests – to demonsrate the positive impact Badger’s association with Laud had on his business.

McCullough concludes that these sources can be used to confirm recent trends in the historigraphy of printing that have moved away from seeing printers as motivated solely by commercial interests.

As a work of historical analysis this is properly post-revisionist, crossing a number of academic disciplines and using a wide range of sources. I found it a really stimulating read and would recommend checking it out.