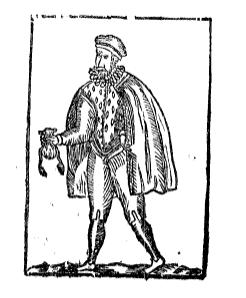 On Christmas Day in 1611, a man wearing a black velvet-lined cloak slipped into the Chapel Royal at Whitehall while James I was taking communion. He tried to pick the pocket of Leonard Barry, a servant to Lord Harrington of Exton, but was caught red-handed. In one pocket was found a knife, and in other other Barry’s purse containing 40 shillings.

The man was John Selman, and he became something of a celebrity as a result. He appeared in Ben Jonson’s Twelfth Night masque Love Restored as the character of ‘the Christmas Cutpurse’. Meanwhile the real Selman confessed his crime and was sent to the Marshalsea prison. At this trial, he pleaded to be allowed a Christian burial and that his property should not be taken from his wife. The judges, who included Francis Bacon, agreed to this on condition that he turned king’s evidence, naming:

Those of your faculty and fraternity, who are still… ready to enter into the presence Chamber of the king.

Selman agreed to this, and his execution was set for 7 January 1612: the day after the Christmas period had ended. He was hanged near Charing Cross, not far from the scene of the crime.

Just as Jonson had rushed to include Selman in his masque, so London’s stationers hurried to produce accounts of his trial and death. The bookseller Thomas Hall registered the title of The araignment of Iohn Selman (London, 1612), printed by W. Hall, on the day after the execution. This was a standard pamphlet account of a crime, trial and execution, including a version of Selman’s gallows speech. The printer George Eld produced for the bookseller and ballad specialist John Wright a broadside titled The Captaine Cut-purse, also sold under an alternate, less catchy title of The arrainement, condemnation, and excution of the grand [–] Iohn Selman (both London, 1612). Two other ballads about Selman, which do not survive, were also registered with the Stationers’ Company.

My image is a woodcut from the title page of The araignment of Iohn Selman, imagining what Selman looked like. The same woodcut was also used for The Captaine Cut-purse and for  a ballad telling Selman’s story. Given that the pamphlet and ballads had different printers and undertakers, this suggests either a degree of commercial cooperation or a printmaker shopping his block around a number of stationers.

Happy Christmas to everyone who has read this blog during 2011, and may your 2012 be free of cutpurses and cony-catchers.