I finally got round to visiting Tate Britain for its Van Dyck and Britain exhibition on Friday. It’s a very well put together collection. The exhibition starts with a look at English portraiture before Van Dyck’s arrival in London, leading through into portraits of Charles I and his family and of Charles’s court. As well as the familiar portraits – Charles on horseback, Henrietta Maria in all her finery,  the young Charles II in armour – it has some less well-known works like this amazing portrait of Lucy Percy, Countess of Carlisle: 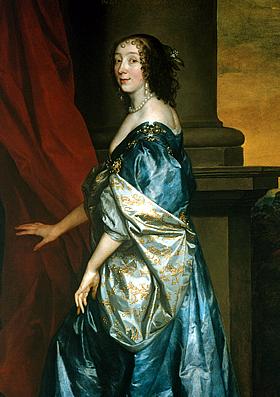 It then moves from the public to the private to focus on Van Dyck’s personal life. The highlight here is undoubtedly the famous double portrait of  Van Dyck and his friend Endymion Porter:

For me one of the best parts of the exhbition was the section on the impact of Van Dyck. I was really pleased that the Tate had got hold of engravings by Pierre Lombart inspired by Van Dyck’s portrait of Charles I on horseback. Here is the first, showing Oliver Cromwell as Lord Protector and produced at some point after 1655:

It is a straight lift from Van Dyck’s portrait of Charles I on horseback with M. de St Antoine: 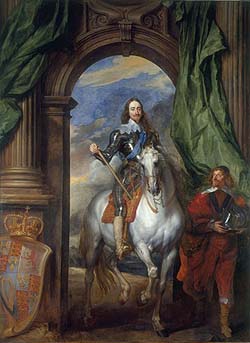 Alongside the Cromwell engraving, the Tate had a subsequent impression of the plate, this time with Cromwell’s head scratched out and Charles I’s head put in:

But I thought the Tate missed a trick by not showing the intermediate plate, which has become known as the Headless Horseman:

There was also a wonderful portrait by John Singer Sergeant of the Earl of Dalhousie, which owes a debt to Van Dyck’s portrait of Lord John Stuart and his brother Lord Bernard: 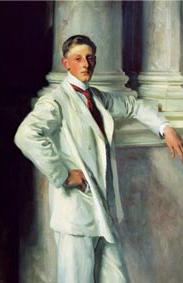 Talking to a few other visitors, it seems that most people there on Friday afternoon were struck by how well Van Dyck captured the fashions of the 1630s: the flowing hair, the sumptuous fabrics. But walking out of the Tate, I realised that what had inspired me most wasn’t the emblems and accessories in the portraits – flawlessly executed as they are – but the simpler portraits, where the sitter’s expression is what conveys their power. The picture I kept coming back to, above all others, was Van Dyck’s portrait of the earl of Strafford with Sir Philip Mainwaring.

As a painting this is sparsely detailed compared to many of the martially- or mythologically-inspired grand portraits of Charles’s court.  But Van Dyck has captured Strafford’s mix of charisma and utter ruthlessness perfectly. Walking out onto Millbank it was Strafford’s steely gaze that I took away with me.

9 Comments to “Van Dyck and Britain”