‘Work?’ he said to me once, astonished, when I referred to our classroom activities as such. ‘Do you really think that what we do is work?’

‘What else should I call it?’

‘I should call it the most glorious kind of play.’

I’ve been reading newsbooks from the 1640s in recent months as I gear up for my dissertation. In doing so, I have increasingly kept returning to the question of why their editors wrote them. When I first started reading seventeenth-century printed books I think I had a tendency, subconscious or otherwise,  to assume that they were written either for ideological reasons, or for profit. At first glance, writing for pleasure doesn’t seem to fit with a purportedly rational public sphere.

And yet it’s hard to get away from the fact that some editors obviously took a mischievous pleasure in the act of writing. Editors personified their own and rival titles as larger-than life characters, like this woodcut of Mercurius Aulicus from Newes from Smith the Oxford jaylor (1645): 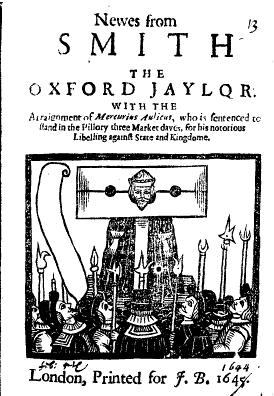 Ideological battles were often fought out in playful or mischievous language, like the attacks on Marchamont Nedham’s pro-Parliament newsbook Mercurius Britanicus over the spelling mistake in its title. Here is the anonymous author of a 1647 broadside called Queres to be considered having fun with Nedham’s spelling:

Whether Britannicus doth not repent, that hee made Hue and Cry after the King, and that whereas before hee spelt his name false, whether he wisheth not he had not spelt it at all, and whether he invoketh not Neptune to beare him safely to some forraigne Land?

Nedham’s tortuous justification for continuing with the mis-spelling basically boils down to an extended “it’s not me that can’t spell, it’s you”:

In the meane time, we have him quarelling at Britanicus for a letter, challenging him that he cannot spell his own name. Poore Aulicus! The Academicall Cur, (like a whelp of Lilly) begins to bark Criticisme, in stead of Slander. Any thing must serve now (in this low ebbe of Affaires) to helpe out the Pamphlet. But thou art mistaken; we doe not write, not read here, as you doe at Oxford: they are not able to spell one word true there; for they spell the Parliament Rebels; Popery, the Protestant Religion; Idolatrie and Superstition, Decencie; Episcopacie, Iure Divino; Reformation, Schisme &c and many such strange kind of spellings.

Part of the attraction of newsbooks was their regularity – a great innovation at the time. Save for sudden swoops by the authorities, a new edition came out every week with page numbering and content picking up where the last issue left off. Readers certainly found them addictive. The wood turner Nehemiah Wallington complained that his newsbook habit meant:

So many theeves… stole away my mony before I was aware of them.

Others shared Wallington’s habit. Thomas Juxon regularly copied extracts from newsbooks into his diary. Fighting his addiction, John Rous protested (too much) that:

The many occurences about the Parliament businesses… are extant in multitudes of bookes and papers (unto which God in mercy put an end!).

But I’ve started to wonder whether writing the news couldn’t sometimes be as addictive as reading it. Exposure to a national audience;  hundreds of copies of your title published every week; almost immediate responses, both positive and negative, in other newsbooks and pamphlets: all these could have been innovative and exhilarating for certain kinds of personality. The explosion of print in 1641 permanently changed the way that politics in England operated, giving public opinion a much wider role than ever and further opening up affairs of state to those traditionally outside the political classes. In such an environment, for some at least, writing newsbooks must have been fun.

None of this is to suggest that journalism in mid-seventeenth century England was a game. Being involved in unlicensed newsbooks in the 1640s and 1650s could be dangerous. Printers could have their presses confiscated, and printers and writers alike could be imprisoned. But reading some of the exchanges between rival editors, you do wonder whether a “glorious kind of play” had at least some role, alongside the political or financial gains that could be made, in popularising newsbooks.

5 Comments to “The great game?”